I am three years old.

Every morning I wake up and eat my breakfast while watching Rocko’s Modern Life or Hey Arnold! I wear pajamas with cartoon characters on them. I attend a pre-school where I am taught things like the alphabet and the five senses. I play on a jungle gym with my friends. We do arts and crafts.

My grandmother has the news on. I see a line of kids running out of school with their hands behind their heads. Men dressed in black from head to toe run beside them. They play audio of a 911 call. There are distant bangs and a woman yelling, “Get under the table—kids, get under the tables!”

I am seven years old.

Every morning I wake up and eat my breakfast while watching Yu-Gi-Oh and Pokémon reruns. I am a picky eater who refuses to eat anything that isn’t chicken fingers or Pop-Tarts. I go to an elementary school with a large library and an ocean-themed reading room. I like to play pretend with my friends and talk about horses. We learn our times tables and how to write our names in cursive.

We’re standing in line in one of the hallways near the front doors of the school. Our teacher is getting something from the office. I rock back on my heels, bored out of my mind. My best friend Hope is in front of me.

I see a man I don’t recognize walk into the building. Something is bulging out of his pocket. It’s black. He doesn’t stop to talk to the receptionist.

I don’t know why, but I think: Does he have a gun?

“Hope,” I whisper because talking in line is strictly against the Rules. “Did you see that?”

“He had something in his pocket.” She noticed it too.

She’s dismissive of our fear. She reassures us, again and again, that it’s nothing. There is no man with a gun. Stop being silly. Stop trying to rile people up. But they still send someone after him. Ms. Christie tells the receptionist at the desk, “It’s probably nothing, but you know, you can never be sure—”

It’s a false alarm. The first of many.

I’m twelve now, and someone has called in a bomb threat.

My family has moved to a new state, and I have a new group of friends. We’re the “edgy” kids who wear black and color our hair in bright, defiant streaks. I wear nothing but baggy T-shirts and jeans. My body is changing, and I want to be invisible. Boys don’t notice me, which bothers me. Girls don’t notice me; it worries me that I want them to.

“How long is this going to go on?” I’m bored. I didn’t bring a book. Two of my friends

have cell phones, but I don’t. It’s stuffy in the gym.

Kenna chimes in, “I heard they saw someone with a rifle walking around.”

“Bullshit,” I say. I cuss now, but never around my parents.

“I heard it was a shotgun,” says Alex. She doesn’t look up from her phone. It’s an actual iPhone. The rest of us are jealous.

I act like I don’t care. “They said it was a bomb threat, not a gun threat.”

“So, they pack us into one place? What if they put the bombs in the gym?” Kenna says.

I want Kenna to shut up. “It’s probably just a prank.”

Alyssa speaks up for the first time. She’s been quiet. “Well, if they’re going to keep us here for-fucking-ever, I’m going to listen to music.” She pulls out her iPod.

We share the earbuds and bang our heads along to Linkin Park’s “Bleed It Out” until we forget we’re afraid. Police and bomb-sniffing dogs sweep the middle school campus.

We’re given the all-clear.

It’s our second empty threat in a year. Business as usual.

Alyssa and I toss our heavy backpacks into the back of my mom’s car and climb in. We both have our learner’s permits, but she still picks us up from school. Alyssa has a new boyfriend. I’m “talking” to a guy from chemistry. We both can’t wait to get out of this school and out of this town.

“How was school?” My brother’s in the passenger seat.

“Fine.” I shoot him a look as I buckle my seatbelt. He never asks about school. The radio is playing a pop song: Don’t you worry child, Heaven’s got a plan for you.

This is where my mom usually starts peppering us with questions: what we covered in class today, how my monologue in drama went, did I get my test grade back. But she’s silent.

Alyssa and I start talking in the backseat. Our teachers are unreasonable, and our classmates are stupid. Someone smoked weed in the boy’s room in Brown Hall. There’s a basketball game on Friday. We debate the pros and cons of going as the car inches through the long line of students, teachers, and parents trying to escape.

We stop mid-conversation as the radio rattles off the facts as they currently stand. I feel like someone just dumped a bucket of ice water over my head.

“Why didn’t you tell us?” As par for the course with teenagers, I direct my anger and confusion at my mom. “Why didn’t you say something when we got in the car?”

“What was I supposed to say?” My mother raises a hand off the wheel in a gesture of helplessness. “‘How was school, by the way, almost twenty little kids are dead?’”

The final count is twenty-seven.

I’m seventeen and having a nightmare.

I’m in drama when we hear the shots. They sound like the fireworks we set off at Alyssa’s last birthday party. Our drama teacher is out of the room; the class is comprised entirely of drama club members, and he trusts us to mind ourselves.

With no adult to guide us, we panic. I see kids scramble across the hall to our prop storage room. You can climb the wooden pallets all the way up to the ceiling, move the white ceiling tiles, and hide up there. I start to follow them until I realize the shots are getting louder. We won’t all make it up there in time.

My heart is racing now. I grab my friend Mia and drag her back into the drama room. There’s a smaller room, called the Green Room, that our teacher sometimes uses for storage. Drama club members use it to make out. I made out with another girl in there, and the experience left me so confused I avoided the room entirely. But now it’s my only hope for survival.

I drag Mia inside and shut the door. A row of old theater chairs sits inside. We crouch behind it.

The shooter is getting closer.

More shots, right outside. The kids who didn’t make it up to the ceiling are dead now. I know it, and I feel cold all over. The hallway door opens. Mia is crying harder now.

But she won’t. I see his silhouette through the Green Room’s curtained windows. I see the shadow of the gun. I think he hears her hiccupping sobs, so I clamp my hand over her mouth.

I wake up. My face is wet with tears, and my hand is clenched around my pillow. My fingers ache.

The next day in drama class, I keep my eye on the door. I listen for shots. It was so real, so vivid; I feel certain it’s a sign. A premonition of things to come.

But the nightmares don’t stop.

I’m eighteen and still drunk when I wake up.

I’m in my first year of college. My best friends are my sorority sisters and my Dungeons & Dragons group. I’ve realized I’m bisexual, but only my friends know. A few months ago, I was diagnosed with depression and anxiety after taking a fistful of pills in the middle of a dissociative episode. I have escape routes planned for every one of my classes.

My mouth tastes like the cheap wine my roommates and I split the night before. I slept through two of my alarms, but not the third. I check my phone. I have several messages and missed calls. One text sits at the top of my notifications:

STAY IN YOUR DORM.

“No one can find their way out of the Math & Physics Building on a good day. Those people are fucked.”

“As if having an 8 am math class wasn’t bad enough.”

“Having Trig this early would make me want to go on a rampage too.”

The all-clear comes twenty minutes later. Just a senior wearing a mask and trying to be funny. Go to your classes. Everything’s fine.

The day passes as normal. But the brief lockdown lingers in my mind.

As I chew on dining hall chicken fettuccine, I idly choose my theoretical escape route. My chicken is bland. I add salt as one of my sorority sisters sits down next to me. Would it be better to run for the exit, or hide under my table? No, wait—I read they look for that now. Exit it is.

“Can I see your notes from Bio?” I ask. My sister slides her highlighted notebook across the table and tucks into her dinner. We talk about an upcoming charity event. Neither of us even thinks to bring up this morning.

I keep one eye on the shifting crowd of students while I copy down notes. It’s probably nothing. It’s always been nothing.

But you can never be certain.

I see the shadow of the gun. 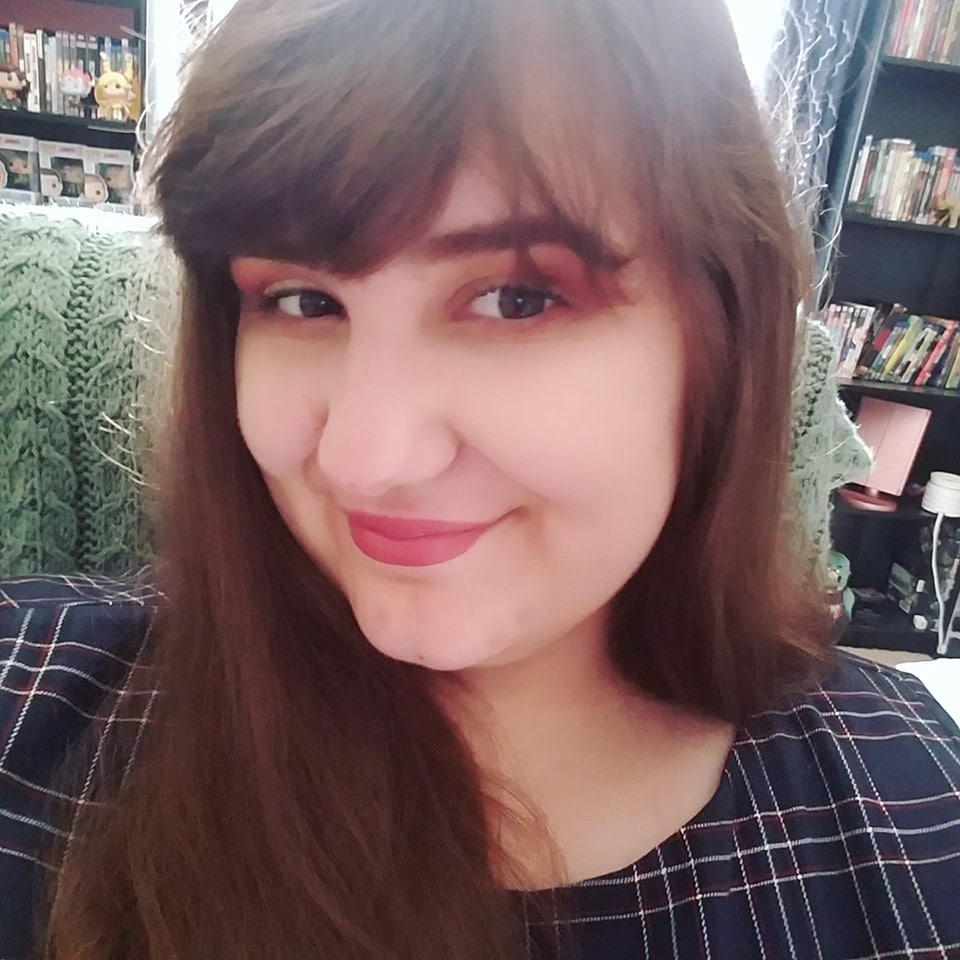 Christa Feazell graduated from Georgia Southern University with a Bachelor’s in Writing & Linguistics. Her short story “Ivan’s World” was featured in GNU Journal’s Mindscapes and Dreams in 2017. She now works full-time as a Jr. Content Writer for a background screening company in Atlanta, Georgia.